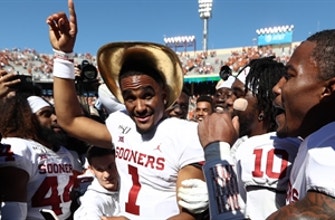 Jalen Hurts and the Oklahoma Sooners took care of business in the Red River Showdown against Texas in a 34-27 victory. After the game, the Sooners celebrated with the Golden Hat, the trophy that goes to the winner of this classic rivalry each season, and FOX Sports was right there on the field alongside Hurts. Get an exclusive, behind-the-scenes look at Oklahoma’s postgame as we followed Hurts through the festivities.